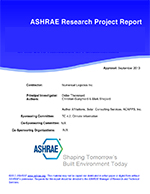 In order to size the required equipment, the HVAC design engineer must be able to estimate with certainty the amount of energy added to the environment from various heat sources and lost through various heat sinks located in a room. Heat could be added from several sources such as the presence of many people in a classroom or office, solar radiation through windows, and incandescent room lighting. A sink could consist of outside doors and windows in winter or a basement floor or wall that remains at an essentially constant temperature throughout the year. By closely estimating the heat gain or loss, the HVAC equipment will not be undersized with insufficient capacity or oversized with costly unutilized excess capability.

Building and industrial plants make use of electrical power for many uses such as lighting, driving motorized devices, HVAC, and energy transmission and distribution throughout the structure. All of this electrical equipment contributes to the total heat load. Estimating the total amount of rejected heat is a necessary part of sizing the heating and refrigeration equipment required for the building.

Until recently, the primary source of information available to the design engineer for estimating the electrical equipment rejected heat is the paper by Rubin (1979). In this well used document, the rejected heat values for transformers, power distribution equipment, motors, switchgear, and power cables, to name a few, were presented in tables for a range of equipment sizes common to indoor equipment. The data presented by Rubin was obtained from the paper presented by Hickok (1978) and from other, unspecified manufacturers. Hickok, who worked for GE at the publication time of his paper, states, "The data are on General Electric products..." At no point in either Hickok's paper or in Rubin's paper is there a discussion of measurement procedure or measurement uncertainty. Rubin's motivation for publishing the data was to aid the HVAC design engineer. Hickok's motivation in his paper was to aid the factory engineer in identifying plant locations where efficiency could be improved. Hickok's motivation is easy to appreciate since the energy price shocks provided by two oil embargoes made increasing efficiency of existing plants, buildings, and factories the first choice in reducing the costs of production. McDonald and Hickok (1985) later co-authored an update of Hickok's 1978 paper with much of the same data.
The information provided by these papers is dated. Since the oil embargoes of the 1970s, many electrical equipment manufacturers have taken pains to increase the efficiency of their products.

At the same time, advances in power electronics and computer control have made much of the technology reflected in the 1970 equipment obsolete. Another change that has occurred since Rubin published his work is that the manufacturing standards that apply to the various items of power equipment have been re-issued and updated several times. These standards could provide details for measuring the power loss in the equipment where, perhaps, originally none existed.

Also, the standards might specify a maximum level of uncertainty for performing the measurements and any data reported by a manufacturer claiming to follow the standard could be deemed reliable. Thus, there is a need to update the 30 years old information presented by Rubin.

White and Pahwa (2003a) reported on work undertaken to provide new, up-to-date equipment heat loss data as well as information on losses corresponding to part loads. A result of this project was the issuance of a proposed design guide for estimating the environmental heat gain. The scope of the work was reported in White, Pahwa, and Cruz (2004a) while a synopsis of the design guide was reported in White, Pahwa, and Cruz (2004b). While good strides were completed in the work of White et al., RP-1104 was a beginning in the development of accurate ways of estimating the rejected heat of indoor electrical distribution equipment.