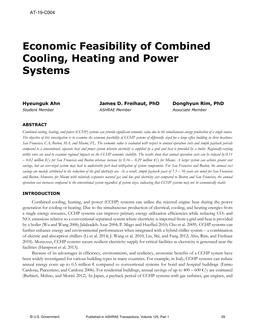 Combined cooling, heating, and power (CCHP) systems can provide significant economic value due to the simultaneous energy production of a single source. The objective of this investigation is to examine the economic feasibility of CCHP systems of differently sized for a large office building in three locations: San Francisco, CA, Boston, MA, and Miami, FL. The economic value is evaluated with respect to annual operation costs and simple payback periods compared to a conventional, separate heat and power system wherein electricity is supplied by a grid and heat is provided by a boiler. Regionally-varying utility rates are used to examine regional impacts on the CCHP economic viability. The results show that annual operation costs can be reduced by 0.11 –0.42 million $/y for San Francisco and Boston whereas increase by 0.16 – 0.29 million $/y for Miami. A larger system can achieve greater costsavings, but an over-sized system may lead to undesirable part load utilization of system components. For San Francisco and Boston, the annual cost savings are mainly attributed to the reduction of the grid electricity use. As a result, simple payback years of 7.5 – 10 years are noted for San Francisco and Boston. However, for Miami with relatively expensive natural gas and low grid electricity cost compared to Boston and San Francisco, the annual operation cost increases compared to the conventional system regardless of system sizes, indicating that CCHP systems may not be economically viable.