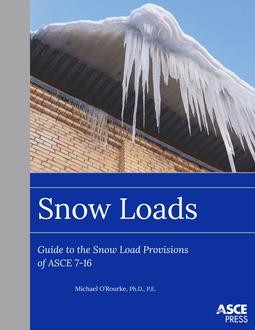 Snow Loads: Guide to the Snow Load Provisions of ASCE 7-16

Snow Loads: Guide to the Snow Load Provisions of ASCE 7-16 supplies detailed, authoritative explanations of the snow load provisions contained in Minimum Design Loads and Associated Criteria for Buildings and Other Structures, Standard ASCE/SEI 7-16. With clear, concise language, Michael O?Rourke illustrates the key concepts for applying the provisions to the design of new and existing structures that could collect falling or drifting snow.

This guide includes 35 worked examples of real-life design problems, as well as answers to 20 frequently asked questions, including a new one on snow capture by solid walls.

is an essential supplement to ASCE/SEI Standard 7 for all engineers, architects, construction professionals, and building officials who work on projects in regions subject to snow.