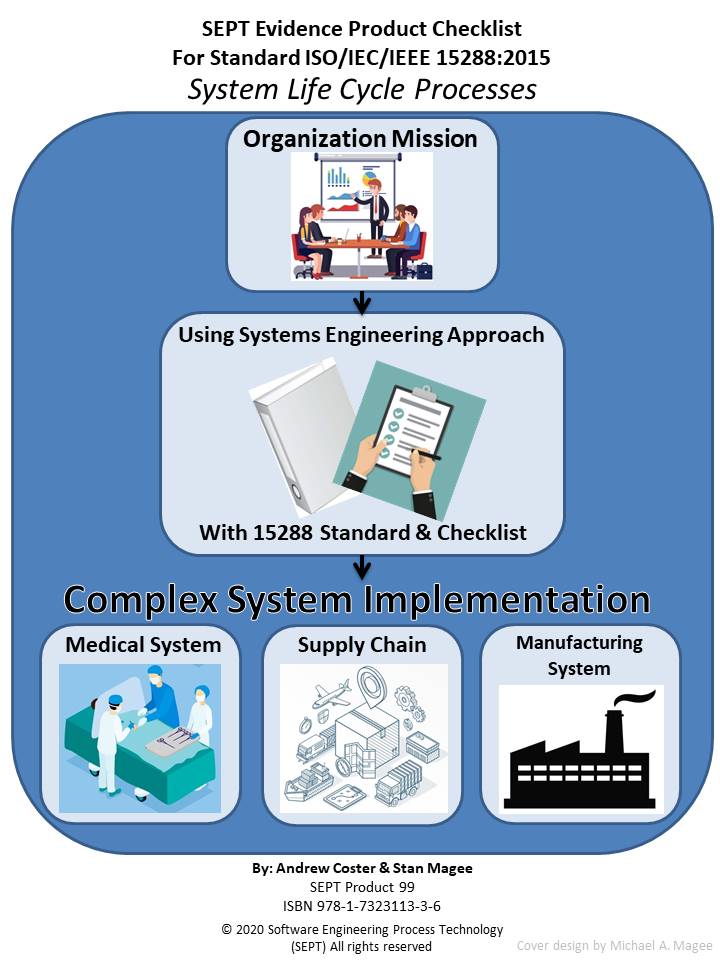 Every Checklist comes with four hours of free consultation. SEPT will answer any question concerning the standard or Checklist for 60 days after purchase.

New! Order the "Self-Extracting File Format" option to get this product in an editable Microsoft Word document!

By 2015, the world was able to collect more and more "lessons learned" from many large projects that failed, or had massive cost, or schedule overruns. With this new data 15288 grew in size, to over 1050 artifacts. If an organization does not have a clear picture of what artifact (Documentation) is required in the life cycle of such a system, it is easy to miss an important process step. This is why a checklist like the SEPT checklist for 15288 is so important.

The checklist defines by each clauses and subclause what is required in the standard as Procedure, Plan, Record, Document, Audit or Review.

The first step that an organization has in meeting the requirements of a standard such as Standard 15288 is to determine what is required and what is suggested. Often these types of technical standards are confusing and laborious because the directions contained in the standards are sometimes unclear to a lay person. The checklists lift this fog around a standard and state what is required and suggested by the standard in a clear and concise manner.

To aid in determining what is "required" by the document in the way of physical evidence (artifact) of compliance, the experts at SEPT have produced this checklist. The SEPT checklists are constructed around a classification scheme of physical evidence comprised of policies, procedures, plans, records, documents, audits, and reviews. There must be an accompanying record of some type when an audit or review has been accomplished. This record would define the findings of the review or audit and any corrective action to be taken. For the sake of brevity this checklist does not call out a separate record for each review or audit. All procedures should be reviewed but the checklist does not call out a review for each procedure, unless the standard calls out the procedure review. In this checklist, "engineering drawings, manuals, reports, scripts and specifications" are included in the document category. In the procedure category, guidelines are included when the subject standard references another standard for physical evidence. The checklist does not call out the requirements of the referenced standard. The authors have carefully reviewed the Standard 15288 and defined the physical evidence required based upon this classification scheme. SEPT's engineering department has conducted a second review of the complete list and baseline standard to ensure that the documents' producers did not leave out a physical piece of evidence that a "reasonable person" would expect to find. It could certainly be argued that if the document did not call it out then it is not required; however, if the standard was used by an organization to improve its process, then it would make sense to recognize missing documents. Therefore, there are documents specified in this checklist that are implied by the standard, though not specifically called out by it, and they are designated by an asterisk (*) throughout this checklist. If a document is called out more than one time, only the first reference is stipulated.