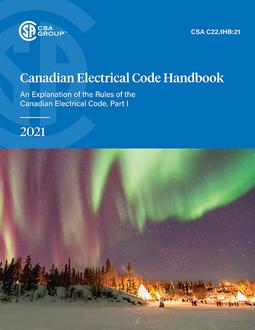 This Handbook provides background information on the reasons behind the requirements in the Canadian Electrical Code, Part I, and gives an explanation of the Rules in plain, easy-to-understand language. The Handbook is intended to provide a clearer understanding of the safety requirements of the Code.

The content of this Handbook is not meant to form a code of mandatory requirements. The mandatory language ("shall") that is used in the CE Code, Part I, has not been used here. Care has been taken to ensure that the intent of the Code Rules is clear to the users of the Handbook. However, users of the Handbook must not under any circumstances rely on it to determine the current requirements of the Code. As always, reference must be made to the Code itself and any local amendments. Consult with the authority having jurisdiction (AHJ) for specific Code interpretations. CSA Group does not assume responsibility for any errors or omissions resulting from the information contained in this Handbook.

The Rules in the CE Code, Part I, are divided into two groups. Sections 0 to 16 and 26 are considered general Sections, and the other Sections supplement or amend those general Sections. Therefore, a requirement in the supplementary Sections takes precedence over a general requirement. For example: Preface:

The Code applies to all electrical installations for buildings, structures, and premises and is intended to apply to all voltages. Although low voltages may not present a shock hazard, there are conditions that can lead to the injury to persons and damage to equipment.

The Scope specifies the subjects that the Code applies to and additionally lists subjects that are not within the purview of the Code so that the user can determine additional local requirements, as determined by the authority having jurisdiction. For example, the requirements for electrical systems on aircraft and ships are not covered in the Code; those are regulated by Transport Canada. If an application is excluded from the Scope of the Code, the AHJ should be contacted to determine the requirements that apply within that jurisdiction.