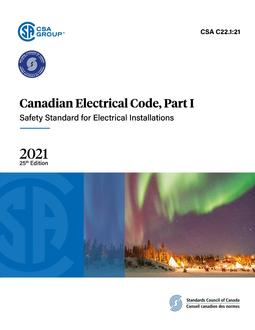 This edition contains important revisions to many Sections. Section 64 features a new Subsection governing installation of energy storage systems and Rules for functionally-grounded renewable energy systems. Several important changes appear in Section 26, including a new requirement for ground fault circuit interrupter protection for all 15 A and 20 A receptacles located outdoors within 2.5 m of grade.

New requirements in support of climate change adaptation appear in several Sections of the Code. Section 22 now contains a new Subsection for farm buildings housing livestock, as well as revised Rules for equipment in Category 1 and 2 locations.

Other significant revisions in this edition include the following: Many of the changes in this edition were developed by cross-functional working groups. Their work is gratefully acknowledged.

This Code applies to all electrical work and electrical equipment operating or intended to operate at all voltages in electrical installations for buildings, structures, and premises, including factory-built relocatable and non-relocatable structures, and self-propelled marine vessels stationary for periods exceeding five months and connected to a shore supply of electricity continuously or from time to time, with the following exceptions:
a) installations or equipment employed by an electric, communication, or community antenna distribution system utility in the exercise of its function as a utility, as recognized by the regulatory authority having jurisdiction, and located outdoors or in buildings or sections of buildings used for that purpose;
b) equipment and facilities that are used in the operation of an electric railway and are supplied exclusively from circuits that supply the motive power;
c) installations or equipment used for railway signalling and railway communication purposes, and located outdoors or in buildings or sections of buildings used exclusively for such installations;
d) aircraft; and
e) electrical systems in ships that are regulated under Transport Canada.

This Code and any standards referenced in it do not make or imply any assurance or guarantee by the authority adopting this Code with respect to life expectancy, durability, or operating performance of equipment and materials so referenced.