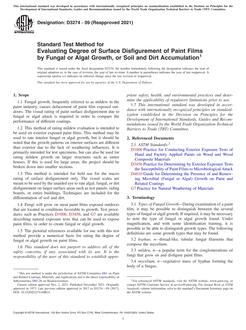 Standard Test Method for Evaluating Degree of Surface Disfigurement of Paint Films by Fungal or Algal Growth, or Soil and Dirt Accumulation

1.1''Fungal growth, frequently referred to as mildew in the paint industry, causes defacement of paint film exposed outdoors. The visual rating of paint surface disfigurement due to fungal or algal attack is required in order to compare the performance of different coatings.

1.2''This method of rating mildew evaluation is intended to be used on exterior exposed paint films. This method may be used to rate interior fungal or algal growth, but it should be noted that the growth patterns on interior surfaces are different than exterior due to the lack of weathering influences. It is primarily intended for test specimens, but can also be used for rating mildew growth on larger structures such as entire houses. If this is used for large areas, the project should be broken down into smaller sections.

1.3''This method is intended for field use for the macro rating of surface disfigurement only. The visual scales are meant to be used by the unaided eye to rate algal, fungal, or dirt disfigurement on larger surface areas such as test panels, siding boards, or entire buildings. Techniques are included for the differentiation of soil and dirt.

1.4''Fungi will grow on most paint films exposed outdoors that are located in conditions favorable to growth. Test procedures such as Practices D1006, D3456, and G7 are available describing natural exposure tests that can be used to expose paint films, in order to create fungal or algal growth.

1.5''The pictorial references available for use with this test method provide a numerical basis for rating the degree of fungal or algal growth on paint films.

1.6''This standard does not purport to address all of the safety concerns, if any, associated with its use. It is the responsibility of the user of this standard to establish appropriate safety, health, and environmental practices and determine the applicability of regulatory limitations prior to use.

1.7''This international standard was developed in accordance with internationally recognized principles on standardization established in the Decision on Principles for the Development of International Standards, Guides and Recommendations issued by the World Trade Organization Technical Barriers to Trade (TBT) Committee.