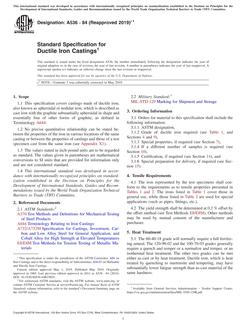 1.1 This specification covers castings made of ductile iron, also known as spheroidal or nodular iron, which is described as cast iron with the graphite substantially spheroidal in shape and essentially free of other forms of graphite, as defined in Terminology A644.

1.3 The values stated in inch-pound units are to be regarded as standard. The values given in parentheses are mathematical conversions to SI units that are provided for information only and are not considered standard.

1.4 This international standard was developed in accordance with internationally recognized principles on standardization established in the Decision on Principles for the Development of International Standards, Guides and Recommendations issued by the World Trade Organization Technical Barriers to Trade (TBT) Committee.