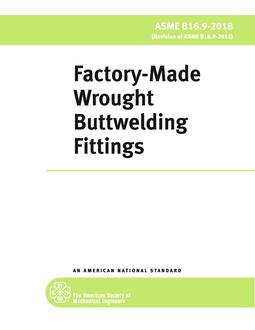 Upon request from industry and government, ASME has been defining piping safety since 1922.

Short radius elbows and returns, which were previously included in ASME B16.28-1994, are included in this standard.

B16.9 is to be used in conjunction with equipment described in other volumes of the ASME B16 series of standards as well as with other ASME standards, such as the Boiler and Pressure Vessel Code and the B31 Piping Codes.

Careful application of these B16 standards will help users to comply with applicable regulations within their jurisdictions, while achieving the operational, cost and safety benefits to be gained from the many industry best-practices detailed within these volumes.

Intended for manufacturers, owners, employers, users and others concerned with the specification, buying, maintenance, training and safe use of wrought and forged fittings with pressure equipment, plus all potential governing entities.